Destination On The Left

Destination On The Left is a podcast focused on the travel and tourism industry that explores successful collaborations, creative marketing ideas and best practices. Interviews are a mix of Destination Marketers, Industry Leaders, Consultants and businesses in the industry. We explore consumer marketing programs and travel trade marketing programs. This podcast provides an opportunity for professionals in the travel & tourism industry to share what they have learned and successes that they have achieved.
Facebook Email RSS Feed
Destination On The Left
2022
November
October
September
August
July
June
May
April
March
February
January

We recently attended the 2019 NYS Tourism Conference in Buffalo, New York and interviewed presenters, conference attendees, and Tourism Excellence Award winners. My interviews focused on the conference themes of inclusion, fostering community engagement, and "tourism is everybody's business", as well as key takeaways from the conference. This episode focuses on some of the award winners, and I hope you find these conversations informative and inspiring. 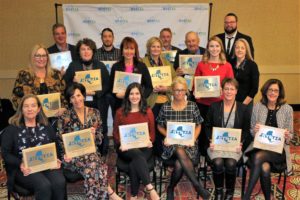 In this final episode of the series, I share my conversations with:

What You Will Learn in This Episode:

Kelly Blazosky from Oneida County Tourism discusses their award-winning "Bike Thru History" program, developed in partnership between Oneida County and six other counties. She shares how the program was developed as a way to engage biking enthusiasts and give them an opportunity to bicycle to important historical sites from the Revolutionary War throughout the region. Kelly explores how they engaged cycling professionals to help determine how to interconnect looping bike paths of varying challenge levels that would also connect with the historical sites. She shares how they developed thirty new routes for cyclists, using the Erie Canalway corridor as the main branch from which the paths would extend. She also discusses how they created a website to showcase the newly looping routes, and how they connected with a cycling route and GPS app to include the routes. Kelly explains how coordination between the various groups and assets and keeping clear communication were key to the program's success. She shares her pride in winning an Excellence Award and her gratitude toward all of the partners involved.

Patrick Kaler from Visit Buffalo Niagara discusses their "Unexpected Buffalo" marketing campaign featuring the character of the same name and his journeys through the destinations and experiences available in Buffalo. He explains how the campaign was launched across 30-second TV spots, print ads, newspapers and magazines, transit advertising, and across social media. He discusses how the target markets for the campaign included Toronto, Rochester, Erie, Pittsburgh, and Cleveland. Patrick shares how the Unexpected Buffalo character is a fully-realized and interactive creation with his own social media presence. He also discusses how the Unexpected Buffalo campaign generated more than $108 million in its first year alone, for a return on investment of $84 for every $1 spent. He shares how the idea for the Unexpected Buffalo campaign was developed almost exclusively in-house and why taking risks and being bold were important to the success of the campaign. He discusses how being recognized by the state and peers is a great thing to take back to stakeholders.

Ron Roney from Watkins Glen State Park discusses renovations to the park and the inclusion of a welcome center located at the main entrance of the park, done in collaboration with the Watkins Glen Chamber of Commerce, and he shares how it has made a major impact on the community. Rebekah LaMoreaux from the Watkins Glen Chamber of Commerce shares how the Chamber partnered with the Park as an opportunity to share with visitors the many other opportunities Watkins Glen has on offer. Ron shares how his biggest takeaway from the project was that the collaboration between a state agency such as the Park and the local tourism services can offer powerful benefits to both parties. Rebekah shares how she learned that promoting tourism is everyone in the community's job. Ron talks about the honor he felt at being recognized for their work, and he shares the pride he feels at contributing toward the positive impact the collaboration is making to the entire region. Rebekah shares her surprise and joy that the state agency gave the project their stamp of approval in the first year, and she discusses the potential of future partnerships.

These 2018 NYSTIA Tourism Excellence Award winners truly demonstrate how thinking outside the box can create tremendous new opportunities. From unique partnerships to original characters, these organizations prove that successful tourism marketing requires creative thought, fresh ideas and teamwork. I hope you’ve enjoyed this series of episodes and learning from the 2018 NYSTIA Tourism Excellence Award winners across all three episodes. Please remember that you can now submit nominations for the 2019 awards by following the link in the resources section below. Thank you for listening!

0 Comments
Adding comments is not available at this time.